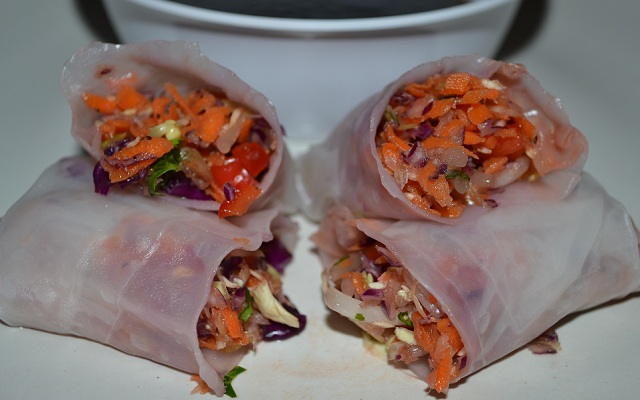 Directions:
You can use whatever veggies you want for this recipe. These are the ones I chose. Shred all the vegetables, garlic, and ginger with a grater. I also broke my bean sprouts in half to make them smaller. Toss the vegetables with salt, pepper, and soy sauce.
I realized that many people eat spring rolls raw, but I usually have warm spring rolls. Therefore, I sautéed half of my veggies on the stove-top and I kept half raw. I liked them both ways.
Rolling the spring rolls is next. One at a time, soak a wrapper in warm water for a few seconds until it becomes soft enough to roll. Lay it flat, put some of the veggie mixture on the wrapper, and start to roll. Half way, fold the ends over the roll and finish rolling until it is closed. Continue, until all of the veggies are used up. I ended up with about 14 spring rolls. They are pretty delicious.

I tried to fry some of the spring rolls, and it did not work for me. Maybe I did not have the right type of wrapper? Maybe I’m just not good at frying, but my spring rolls stuck to the bottom of the pot and broke open spewing all the insides into the oil. For a sauce, I mixed some soy sauce, some sugar, a little rice vinegar and a little sesame oil (it was alright). Next time I’d like to try some sort of peanut dipping sauce.