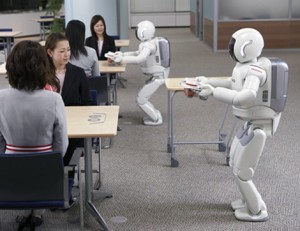 Here is a great video by CBS that looks into the way technology is having a major impact on the workforce of today. Do you think that it is hard to find a job today? Well, based on the level of work that robots are able to today…it looks like finding a job will only get harder.

Here  are some really frightening instances of robots replacing flesh and blood.

Check! Many interstates and highways have cameras and sensors that track the speed of motorists. Those robots also automatically issue you citations for driving in restricted lanes. Have you ever been issued a ticket for running a red light? Well, that was done by a computer automatically without the need for  a human to be standing there watching you. Think about it though, imagine a robot pulling you over while you are driving. The robot comes over identifies you automatically by scanning your face or your fingers and pulls up all of your records from various databases. Can robots be accused of racial profiling?  Imagine a robot walking up to you in New York City and scanning you with for weapons. There will be no need to frisk when the robot can see right through you.

Replacing Soldiers in the Air

Why would a human want to fly over enemy territory with all the advanced radar detectors out there?  So here comes the drone to solve that problem. I wonder when commercial flights will be taken over by drones? If they are trusted to deliver weapons, I’m sure that they can drop off a few UPS packages, or even jet human creatures around.

Replacing/ Helping Soldiers on the Ground

Without a doubt, robots are slowly beginning to take over battlefields, and it will be only a matter of time before the robots lurking in obscurity are are called upon en-mass to defend their human creators. Take a look at some of the work that DARPA is doing with robots, and this is only what we know about.

There are also robots that are wearable. That means that the human is able to enter into the robot-thus acting as an exoskeleton. This technology is being tested today.  Take a look at the video below.

We are all familiar with dolls and cars that speak. How about the dog running around your home or your local police department? Well, anything that can be used for good has the potential to be used to wage war.  Here is a video of  animal-like robots being researched for possible military application.

Do you think that robots are about to take your job? Chances are they are being built to do just that.