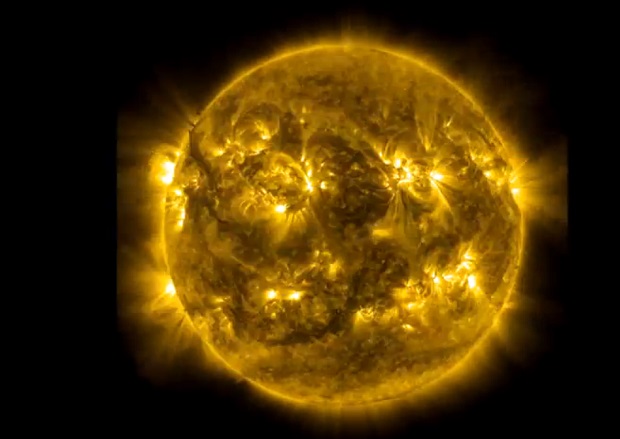 The exam stress is in full flow. So I was trying to take my mind off of it, and I stumbled upon this amazing video that really took my breath away. I am sure that it will take yours away as well. NASA has released images of the sun recorded over 3 years, and they compiled a video showing those images in less than 4 minutes. These images are accompanied by music that helps to create a mood that I think allows us to see how un-important we all are as earthlings. The NASA post befittingly titled, “Three Years of Sun in Three Minutes” Shows the magnificence of the sun. Take a look at the video below.

How Do They Capture Images of The  Sun?

The video shown above was a compilation of images captured by satellites monitored by NASA’s Solar Dynamics Observatory (SDO) at a rate of 2 images captured every day. NASA States:

During the course of the video, the sun subtly increases and decreases in apparent size. This is because the distance between the SDO spacecraft and the sun varies over time. The image is, however, remarkably consistent and stable despite the fact that SDO orbits the Earth at 6, 876 miles per hour and the Earth orbits the sun at 67, 062 miles per hour.

Now take into consideration the speed at which the earth is moving around the sun, which by itself is amazing. Earth by itself is rotating at over 1, 000 MPH based on data obtained from Wolfram Alpha.

Finally, from watching the video of the sun,  you will notice  blacked out areas appearing and disappearing. To this, NASA states:

These images complied for the video of the sun were captured at 171 Angstroms. There are more  images of the sun that can be downloaded and used from NASA’s Goddard Space Center.
For a Closeup look at what is going on on the surface of the sun, take a look at this jaw dropping video of the sun released by NASA a few weeks ago showing what they describe as a Fiery Looping Rain on the Sun.

Here are some books that you can add to your AccuTeach shelf.

What do you think?